Colon cancer is a type of cancer that begins in the large intestine (colon). The colon is the final part of the digestive tract. 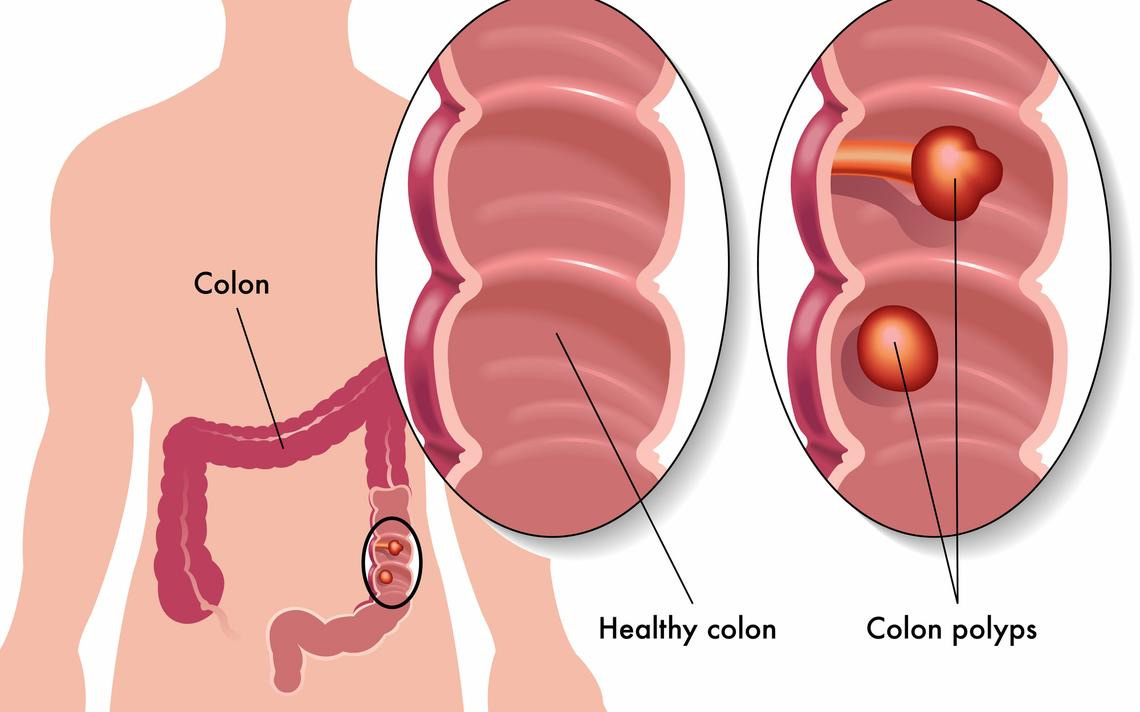 Colon cancer typically affects older adults, though it can happen at any age. It usually begins as small, noncancerous (benign) clumps of cells called polyps that form on the inside of the colon. Over time some of these polyps can become colon cancers.
Polyps may be small and produce few, if any, symptoms. For this reason, doctors recommend regular screening tests to help prevent colon cancer by identifying and removing polyps before they turn into cancer.
If colon cancer develops, many treatments are available to help control it, including surgery, radiation therapy and drug treatments, such as chemotherapy, targeted therapy and immunotherapy.
Colon cancer is sometimes called colorectal cancer, which is a term that combines colon cancer and rectal cancer, which begins in the rectum.

Signs and symptoms of colon cancer include:

Many people with colon cancer experience no symptoms in the early stages of the disease. When symptoms appear, they’ll likely vary, depending on cancer’s size and location in your large intestine.

In general, colon cancer begins when healthy cells in the colon develop changes (mutations) in their DNA. A cell’s DNA contains a set of instructions that tell a cell what to do.

Healthy cells grow and divide in an orderly way to keep your body functioning normally. But when a cell’s DNA is damaged and becomes cancerous, cells continue to divide — even when new cells aren’t needed. As the cells accumulate, they form a tumor.

With time, the cancer cells can grow to invade and destroy normal tissue nearby. And cancerous cells can travel to other parts of the body to form deposits there (metastasis). 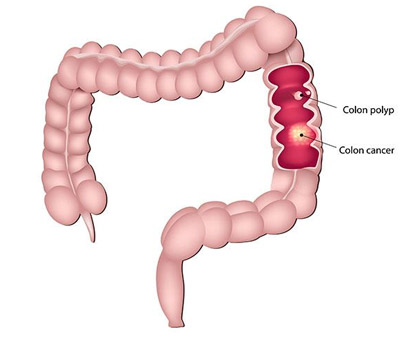 Polypectomy is a procedure in which polyps — small growths on the inner lining of your colon — are removed. It happens during a colonoscopy, which is when your doctor puts a special instrument (called a colonoscope) into your bottom to look at the rectum and colon.

Local excision can treat cancers in the rectum (the lowest portion of the colon). It involves removing the cancer and some of the wall of the rectum. Your doctor may do it through the anus (the opening of the rectum) or through a small cut in the rectum. The procedure does not require major surgery.

Resection involves the removal of part or all of the colon along with the cancer and nearby tissues.

Several types of surgery may be used to treat colorectal cancer:

Partial colectomy: This is also known as a hemicolectomy or segmental resection. The surgeon removes part of your colon and some nearby lymph nodes. The remaining parts are joined in a procedure called anastomosis. Afterward, your bowel habits should be similar to the way they were before cancer. If you have a laparoscopic procedure,
you may leave the hospital faster than you would with traditional surgery. But it will require special expertise. Survival rates are about the same either way.

Proctosigmoidectomy: The diseased section of the rectum and sigmoid colon is removed.

Total proctocolectomy:  This is the most extensive kind of bowel operation and involves the removal of both the rectum and the colon. If the surgeon can leave the anus and it works the way it should, they may make an ileal pouch (see below) so you can go to the bathroom as you did before you had cancer. But often, a permanent ileostomy (see below) is needed, especially if the anus must be removed, is weak, or has been damaged.